I've been meaning to post a photo of some of the work that I've been swallowed by. For now, I offer you "Lou, the Singing Dog." It's different and perhaps better than anything I've ever painted before. I try not to think about how much more I have to do. I've never had to sustain a feeling of "staying in the moment" for such a long period of time. I'll tell you, it is a discipline. Preparing for this show feels strangely spiritual. I have always felt deep emotions when I paint dogs, but this is different. This is something that exists beyond me. It's not about me, it's not even exactly about the dogs I'm painting. It's about how we experience the world. It's about being alive to the smallest moments, those nanoseconds that contain something of the entire universe.

This particular time in my life feels immensely strange to me. Strange, that is, in a (generally) good way. Difficult too, but good. Maybe it is the long hours that I've been putting in, day after day, but this work feels a bit out-of-body.

Last night I also applied to two major art fairs. And right now I need to make a pot of coffee and head back down into the studio. I'm working on another big one. There are so many large paintings! I can't complain though. Painting big is what I love best.

There will be an opening reception for this series of paintings, Dogs of Linden Hills, at Dunn. Bros Coffee, in Linden Hills, Minneapolis. Thursday March 12th, 7-9 pm. I hope to see you there! 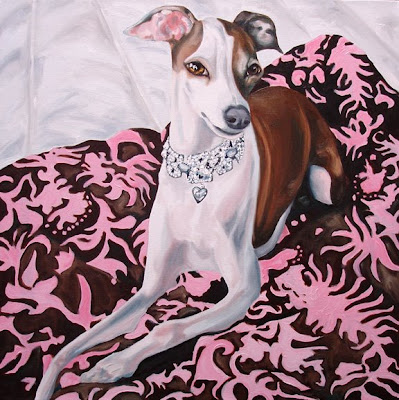 Italian Greyhound extraordinaire
and (dare I say?)
QUEEN of Florida!

She is one of my most recent painting....the one that I blissfully stayed up into the wee hours of the morning putting the finishing touches on. She possesses more bling than I have ever known. Oh, but those jewels, that wink, and posture!
In honor of Trixie's portrait I dedicate today to celebrating the diva that lives inside each of us. I hereby announce you: DIVINE!
Trixie knows her inner Queen.
Do you?

"Think like a queen. A queen is not afraid to fail.
Failure is another steppingstone to greatness." ~Oprah 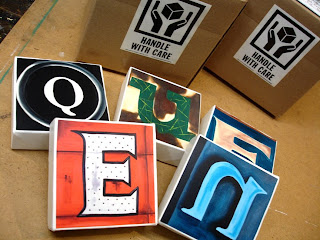 Rule your own destiny.

SAVE THE DATE!! The neighborhood has gone to the dogs...and you're invited!

Well, my friends, once again I'm up to my eyeballs in paint. After a brief (blink of the eye) rest after the holidays, my studio has once again turned into an explosion of canvases and paintbrushes as I prepare for my upcoming exhibition... 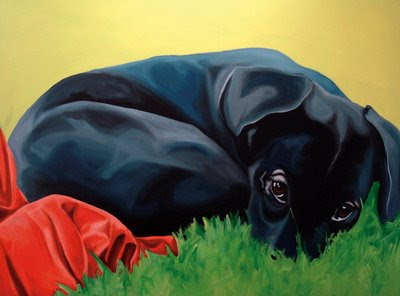 A bit about the show...
Last year, after completing a series of paintings, Dogs of Bryn Mawr, I discovered that I am fascinated by the way the dogs of particular neighborhoods reflect the people who live in them. I am also interested in the way dogs bring people together and create a common ground between those who might otherwise remain strangers--and I find coffee shops to be the perfect place to show this work. Why? Because coffee shops, like dogs, bring people together.

I read somewhere that one of the things that help build a strong sense of community is when neighborhoods have a gathering place. Often times, that place is a coffee shop. These layers of culture and community that are built around dogs and their people interest me greatly.

As some of us know, Linden Hills is one of the most incredible neighborhoods in Minneapolis. What makes it so good? Well, in part: THE DOGS!!

There are nearly THIRTY dogs that will be participating in the Dogs of Linden Hills. Bow-wozers!! Just for fun...imagine what that scene looks like in my studio. I'm surrounded!! You'll be able to meet many of the beautiful canines whose portraits I am painting at the opening.

Until March you will find me in only one place: yep, the studio!

In the meantime, mark your calendars!

Cozy up with a freshly roasted cup of coffee and surround yourself with dog art.
The month of March is waiting for you. ;)