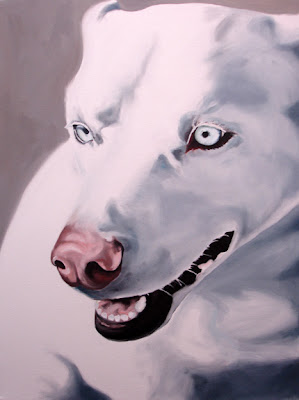 I have just put the finishing touches on a portrait of a dog named Koda. Although I've never met this dog, I've fallen in love with him. I tend to fall in love with dogs in the act of painting them--but I think I've fallen a little harder for this beautiful spirit because he reminds me of my wolfie, Anu. There is a sense of softness about him that is counterbalanced by those piercing eyes--gentle, yet keenly aware.

I began this portrait last week while up north on a week long painting retreat. As I painted, I looked often at Anu...studying where the black of her mouth meets the white of her chin, analyzing the marks around her eyes, deciphering the contours of her face and body in in terms of light and shadow, expression and mood. I could see age settling in on her and it broke my heart. But I also saw how age has brought us to know each other and has endowed her with a different way of seeing--less fierce, more wise.

The thing I love most about painting dogs is that there are never two paintings even remotely alike. Koda has been up for adoption for a long time now. One would think that a beautiful dog like him would get snatched up in a heart beat--but it often amazes me how long it sometimes takes for even the best dogs to get adopted. Luckily, Koda is in good hands and, even as I write this, he is nestling himself into the hearts of his foster family. He is being well taken care of. And yet it breaks my heart to think of all the dogs that are simply put to sleep for lack of better options. Koda was left behind in an abandoned house and was only found when it was discovered that the pipes had burst. Koda was rescued--which makes him one of the lucky ones.

Today I brought my husband, Vinny, to see the new studio space for the first time--oh, and it is such an incredible space! Since I won't move in until November, the best we could do was peek in the windows. On our way there we passed the city pound. Vinny told me that, while he was there to get licenses for the dogs, he noticed two big books on the counter. One filled with photos of dogs being kept in the shelter...and another one filled with all the dogs that have been euthanized. It stuns me to think of the many beautiful beings that this happens to every minute of every day. Then I think of all the people working to make a difference--one dog at a time--and I see how it matters.

These days my studio at home is filled with dogs. I love walking in and seeing their faces shining from one canvas after another. At the moment I am up to my elbows in paint as I prepare for an exhibition of Pet Haven rescue dogs that I will hang in 2 weeks. Some of the dogs have already been adopted and some of them are still waiting to find their forever home. But every dog comes with a story--a story that I hope to capture, even if in some small way.

I hope that this show will help some of these dogs get noticed. What if every dog I painted got adopted? I wish for that. I hope for that. Lately, I find myself hoping for a lot of things. I like the way hope feels--even if it brings tears to my eyes on a regular basis. My heart feels rubbed raw and as though it is ready to burst. I admit that I think I even like the way this rawness feels. However uncomfortable, it makes me feel alive. It connects me. It breaks me open.

A big thank you to Minneapolis photographer, Jessica Hackner of Half Light Photo, for sharing
her photographs of Koda. There's nothing better than painting from a beautiful photograph!
~
posted by Jessie  # 9:59 PM