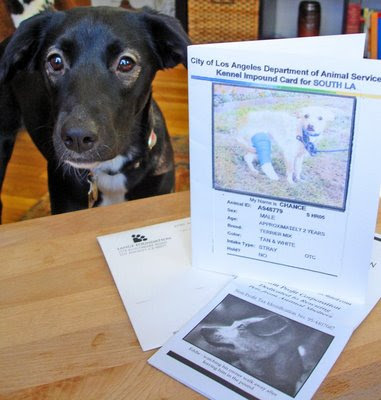 I recently got something in the mail that was one of the best gifts I have ever received.

It was a card from the Lange Foundation, a nonprofit dedicated to saving impounded companion animals in the Los Angeles area.

I had never heard of the Lange Foundation, but since the envelope was addressed to me, I opened it up to see what was inside.

What I found brought tears to my eyes and broke my heart open with more gratitude than I even know what to do with.

On the outside of the card is an image with the City of Los Angeles Department of Animal Services Impound card for South LA. There is a photo of a small terrier mix with it leg bandaged up in a cast and a unsure/hopeful look in his eyes. It says that he is a stray, approximately 2 years old. They've given him the name "Chance."

And if the image wasn't enough, I opened up the card and found this on the inside:

Lange Foundation received a Holiday Gift of Life donation in your honor from Sassy Smith which helped to give me a future.

I was playing ball in front of my house on West 35th Street and my owner's son threw the ball across the street. Throwing caution to the wind, I went after it and that was the last thing I remember about my home.

I woke up in the hospital room at South LA sheter just in time to hear the technician say: "No hope for this one...put him on the vet's list for tomorrow." However, I guess the owner had not admitted that I was his dog, and had booked me in as a stray, so the vet said he had to hold me for 5 days. They put a bandage on my shattered leg and put me in a small cage in a cold room where the door is always locked. Apart from cleaning my cage in the morning and giving me a bowl of kibble, no one paid any attention to me.

After 5 days someone from the Lange Foundation came to the shelter. By mistake, the door had been left open. She came over to my cage and I was so embarrassed as it hadn't been cleaned. A staff member came into the room and said: "You are not allowed to be in here," and she replied: "And you are not allowed to keep animals in this condition." The man replied: "He's on the euth list," and she ended their short conversation by saying, "Not anymore."

An hour later, along with several other dogs from that horrible room, I was in her car on my way to Animal Surgery and Emergency Center.

Again, I seemed to have had a lapse of memory, but the next day I awake to find my leg in a cast and most of the pain had gone. I now have to have "cage rest" for the next 3 weeks, so I am living with the Lange lady in a big cage which overlooks the garden.

Every time she walks by she says: "Chance, this is just a temporary arrangement. Soon you will be at Halfway Home Kennel."

We will see about that!

Sassy Smith is a beautifully big-eared little Schnoodle (a schnauzer and a poodle) that I have been commissioned to paint. Remember when I mentioned how lucky I am to be painting for such wonderful and appreciative clients? Well, Sassy's "mom" is one of them.

I put my whole self into the dogs I paint. I mean, it is an oddly emotional experience. I feel all of my energy go into each painting session and at the same time I feel filled by it. It is an equal exchange of give and receive.

But then I get an unexpected letter in the mail saying that someone I only barely know has donated money in my honor AND it helped to save a beautiful dog's life. And, my gosh, this just floors me! I mean, really, when did my life get this GOOD?!

Even Ella, my rescued babe, was interested in Chance's story. That's her--the lil' black dog in the photo (above). Ella is one of the dogs in my life that has inspired me to find ways for my work to help benefit animals in need. Like many of the best things in life, Ella was "unplanned." I met her while doing a photo shoot with Ode. If it were not for people who cared, would she survived? I love my rescued girl beyond words...and I want to extend that love as far as possible. And then someone like Sassy's mom takes it even a step further. 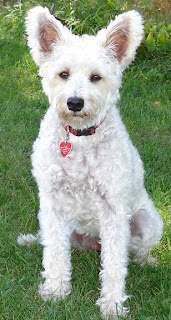 The dogs that the Lange Foundation rescues come in all shapes, colors, sizes and ages. They have rescued and placed over 20,000 cats and dogs who would otherwise have been destroyed at shelters. I am profoundly moved that someone would go out of their way to help other animals in honor of the work I do. 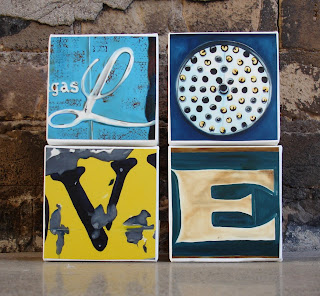 Today I am in love.

I've been thinking a lot lately about how lucky I am to be doing the work that I do. I LOVE my job. I love it so much that I find it difficult to even call it a job. It's not a job. It's a passion. It's an obsession. It is love. 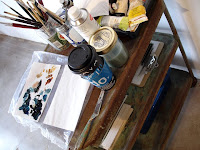 Today, as I worked in my studio, I thought about luck and love and about how we attract people and circumstances into our lives. I thought about how good it feels to have connected with so many incredible clients. Commissioned work is an interesting phenomena. For me, painting is personal and I am amazed--each and every time--how appreciative, gracious, flexible, and wonderful my clients are. Actually, I find it difficult to call them clients. They are so much more than that!

Yes, and so today I dedicate to love. Capital L.O.V.E. (Come on...let me say it just one more time) I love what I do. And I fall in love with the dogs I paint...over and over and over. My heart is a broken record--and, I admit, it feels good.

When I love, things make more sense.
Perhaps, more than anything, that is what draws me to this work. 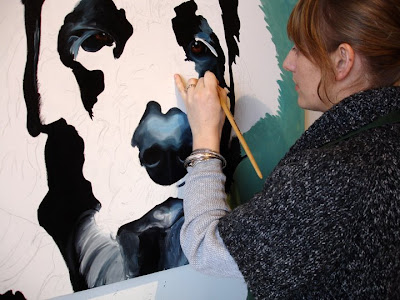